Tyler Mount Gets Ready for the Kent County Show

A lot of time, love, and dedication goes into the vintage vehicles that exhibit in the Kent County Show’s Heritage Section so it’s always nice to see the restoration journey some of the exhibits have been on. Our youngest heritage exhibitor, Tyler, wrote a report on his restoration project that he’s brought to the last two Shows.

I have been to tractor rallies all my life. My first one was a very cold ‘Steam and Transport’ at the Chatham Historic Dockyard one Easter, when I was just 6 weeks old.

After my 8th Kent County Show, when I was just seven, I announced to my Dad that I liked tracked vehicles.  This has stayed with me and finally three years later  I was lucky enough that my parents relented, and when a Ransommes MG5 became available, I got it for Christmas 2017.

My Dad thought that he had bought one that didn’t need much work – or so we thought! After driving it around the garden a few times we realised it wasn’t running properly, and under closer inspection realised the rubbers between the tracks needed replacing.

And as always, then you start to notice other things, like the wheels are all different sizes, and the bushes all needed replacing!

So I set to work under my Dad’s guidance, as you can see in the photos.  Mending and painting  and more mending and even more painting. Everything was primed, undercoated and top coated.

The Ransomme was booked into its first show – The Kent County Show for July 2018, so it became a race against time to get it back together. It was almost completed – there was  just not enough time to repaint the wheels red on one side.

And then I won a prize! I was allowed to drive my Ramsommes around the arena, that made the show for me. It makes me sad, when I watch all the other tractors go around the ring and I am not usually allowed to because of my age….. But this time I was able to join in  – and I loved it!

The engine had a few oil leaks and wasn’t running quite right, so the winter’s project was to sort that out and to then finish repainting my MG5.

I took it  to the Kent County Show again this year and this time I got second in my class. 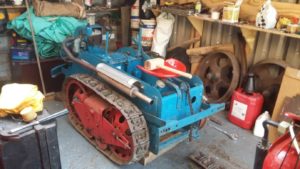 The MG5 before restoration in 2017 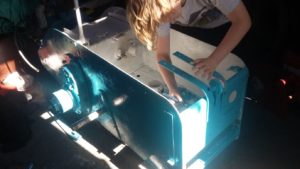 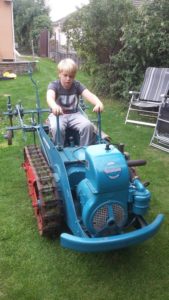 Tyler and the finished MG5